Home > Thyroid > Adrenal Energy: A Supplement To Get Your Adrenals Humming

Adrenal Energy: A Supplement To Get Your Adrenals Humming 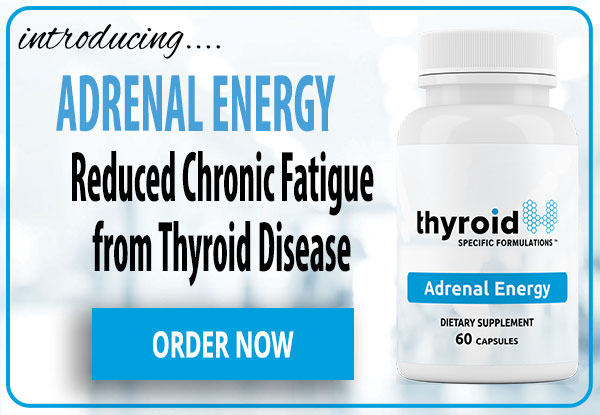 If you are tired or have been generally concerned about your adrenals, then Adrenal Energy is a good fit for you. The normal dosage is two capsules each morning (with breakfast).

Some who have severe fatigue may choose to experiment with a second dose of two capsules at lunch. Most do better with not taking Adrenal Energy past the early afternoon (or it might take longer to fall asleep).

But, beyond that, what’s in Adrenal Energy? And, how does it even work? Here’s the detailed, informed and deep dive you can use to learn more about it…

How Is Adrenal Energy Formulated?

Adrenal Energy is comprised of the following:

What Are The Benefits Of Adrenal Energy?

The benefits of Adrenal Energy include and have been clinically proven to:

How Do You Use Adrenal Energy?

All you have to do is take two pills, once daily, in the morning with food. Use Adrenal Energy in conjunction with medical treatment to identify and resolve other causes of fatigue.

Fatigue is one of the top complaints when it comes to people dealing with thyroid disease. It can manifest itself as low energy, poor mental function, and a lack of exercise tolerance.

Adrenal Energy is a nutritional blend designed specifically to safely improve fatigue symptoms in those with thyroid disease.

Thyroid disease contributes to fatigue through several mechanisms. These include:

Strategies that reverse these mechanisms can be used to help people with thyroid disease regain their normal energy levels.

How Do You Select Thyroid Specific Formulation Ingredients?

This is important. In this case, every single ingredient considered must share the following properties to warrant inclusion…

All considered ingredients must have high-quality evidence proving their efficacy. The best quality evidence is that which demonstrates significant positive outcomes, on human subjects, in multiple, double-blinded controlled studies.
Ultimately, these human subjects and the outcomes should be clinically relevant to the product’s end-users. It needs to mean something for them.

So, what ingredients make up Adrenal Energy? Allow me to break down each, including their relevance to thyroid disease, mechanisms of action, and a review of supporting research.

Cordyceps sinensis is a fungus related to dietary mushrooms. Historically, it has been used as an energy tonic throughout Asia since the earliest recorded medical records.

Cordyceps has been proven to improve energy by:

In a study of energy levels in adults aged 50-75, participants consumed cordyceps or a placebo for 12 weeks.

Exercise performance measured by metabolic threshold increased by over 10% and by ventilatory threshold over 8% in those taking Cordyceps.

They were able to generate more energy than before due to the effects of cordyceps2.

Panax ginseng is a root extract that has been used to improve energy levels. Studies prove that it can lower oxidative stress and improve mitochondrial function in skeletal muscle tissue.

In a recent analysis of over 140 studies, researchers concluded that:
“Ginseng is a promising treatment for fatigue. Both American and Asian ginseng may be viable treatments for fatigue in people with chronic illness3”

In multiple double-blind placebo studies, participants with fatigue given ginseng were shown to improve energy levels over those who received placebo. In many cases, the fatigue scores improved within 15 days of starting ginseng and decreased by dramatic amounts.

L-Carnitine is a naturally-occurring amino acid that is essential for mitochondrial energy production. In optimal health, our bodies produce it in adequate amounts.

When L-Carnitine is low, fatty acids cannot be brought across the cell membranes to enter the mitochondria and therefore cannot be used to produce energy. In chronic conditions such as thyroid disease, L-Carnitine metabolism can be impaired4.

Clinical trials have shown that supplementation with L-Carnitine can improve symptoms of mental fatigue in those with thyroid disease.

In a representative study, 60 people with hypothyroidism and significant levels of fatigue were given L-Carnitine or a placebo. The treatment lasted for 12 weeks. By the end of the 12 weeks, participants noticed clear improvements in fatigue severity, physical fatigue, and mental fatigue.

Subgroup analysis showed that those who had prior thyroidectomies noticed the most dramatic energy improvements from L-Carnitine5.

L-Theanine is a naturally-occurring non-protein amino acid. It is found in foods such as tea and some mushrooms.

In supplement form, theanine has been shown to improve cognitive function and decrease mental fatigue. It improves alpha wave activity of the brain and can have neuroprotective effects against chronic stress.

In a representative study, 30 adults received theanine tablets or a placebo over a four week period. Most subjects were female and the average age was 48.3 years. Numerous tests of mood, cognitive performance, and sleep quality were performed.

Pantothenic acid, also known as vitamin B5, is a nutrient that is required for the production of energy from fats and carbohydrates. It is also necessary for the regulation of adrenal hormones including cortisol, and DHEA8.

In vitro studies have shown that pantothenic acid supplementation can improve the adrenal glands’ responsiveness to ACTH9.

Astragalus membranaceus is a yellow-to-tan root used in traditional Chinese medicine. Historically, it was given for numerous conditions including chronic fatigue, kidney disease, and weakened immunity.

In a double-blind placebo-controlled study, astragalus was given to patients with severe fatigue post stroke. Those receiving astragalus showed improvements in energy levels, quality of life symptoms, and mental function10.

The researchers concluded that:

“These findings suggest that [Astragalus] can ameliorate [fatigue] and improve quality of life, especially cognitive function. . . and social function.”

Rhodiola Rosea is a plant from arctic and Northern European regions that has a long history of being used as an adaptogen.

It has been shown to improve salivary cortisol levels, mental work capacity, and measures of fatigue11.

In a representative study, 100 subjects with prolonged fatigue symptoms used Rhodiola for 8 weeks. Many participants were noticing clear improvements to fatigue within the first week. These benefits continued to improve through the duration of the study. None had adverse effects from Rhodiola12.

Other studies have shown that Rhodiola may improve the powers of attention and lower symptoms of depression13.

Withania Somnifera (Ashwagandha) is an herbal tonic from Ayurvedic medicine. Whereas some tonics may produce side effects of overstimulation, Withania is not prone to. Not only that but it often lowers symptoms of agitation and anxiety while raising energy levels.

A recent double blind placebo controlled study showed the regular use of Withania led to improved regulation of cortisol and lower symptoms of chronic stress14.

In addition to benefits with adrenal function, human studies show that Withania may help thyroid function.

A recent clinical trial showed that patients prone to thyroid disease who were taking Withania experienced increases in their thyroid hormone output15.

Eleutherococcus senticosus (Siberian Ginseng) is the root of an Asian plant with a long history of use as an adaptogen and energy tonic. It is known to act as an antioxidant, an immune tonic, and a blood sugar regulator.

In a review of multiple studies, eleutherococcus has been shown to regulate the output of adrenal hormones in chronic stress conditions and improve the response of the parasympathetic system. It has also been shown to improve energy metabolism and biologic responses to hypoxia16.

In a recent placebo controlled blinded human clinical trial, 87 participants were selected to evaluate the effects of eleutherococcus on chronic stress. Compared to those on placebo, those receiving eleutherococcus showed improvements in surveys regarding symptoms of fatigue and depression17.

L-Citrulline (Citrulline malate) is an amino acid that has been shown to improve exercise capacity of males and females. It is converted by the kidneys into L-arginine and nitric oxide.

In older adults, supplementing with L-citrulline was shown to improve physical performance and the breakdown from fat more than high-intensity interval training (HIIT) alone18.

In a study on L-Citrulline and female strength, female athletes took L-Citrulline or placebo on two separate occasions. Those supplementing with L-Citrulline showed more upper body and lower body strength without increased exertion as measured by heart rate. They were able to generate more energy without pushing themselves harder19

For those with persistent fatigue, despite thyroid treatment, there are some things you may want to consider. This might include iodine regulation, lifestyle strategies to support adrenal function, and the investigation of other potential causes of fatigue for:

How Should You Take Adrenal Energy?

Take two capsules, once daily, with food. Take at least one hour after taking your regular thyroid medication.

Adrenal Energy does not contain any of the following:

Now that you know a bit more about it, how about trying it for yourself? If you’re interested in eliminating fatigue and raising your energy levels, then Adrenal Energy may be perfect for you.