The Adrenal Reset Diet For Those With Candida

Home > Hormone Reset > Iodine: Not Too Much, Not Too Little

Iodine: Not Too Much, Not Too Little 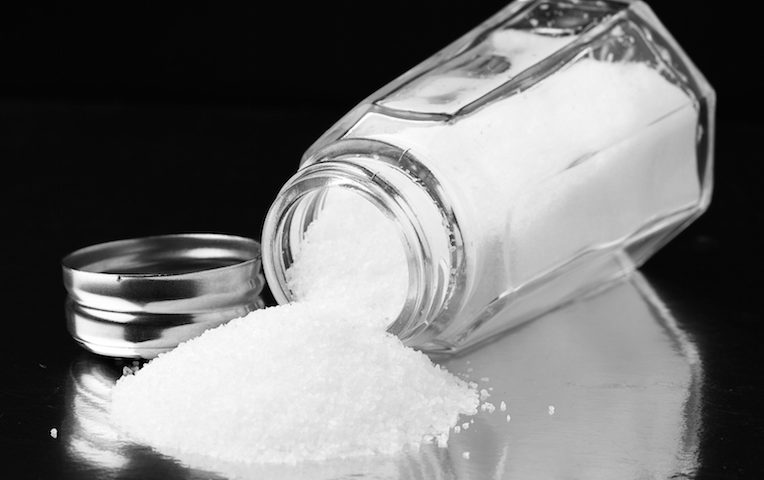 In Arizona, many retirees spend their summers elsewhere. To me, it marks the change of seasons to welcome my ‘snowbirds’ back in the fall and see them off in the spring.

Several years ago I had a kind gentleman return for the winter with new symptoms: watery diarrhea after every meal and a non-intentional tremor of his hand. The diarrhea started three or four months ago, the tremor, more recently. Normally in excellent health, ‘Tim’ joked about getting old and his body falling apart. He had his screening tests completed before I heard about this. They were normal besides a suppressed TSH. On his exam, I found several thyroid nodules that were not present last year and his heart rate was over 100 bpm.

An ultrasound and second level thyroid tests diagnosed Tim with toxic multi-nodular goiter. In seniors, this is most common after high dose iodine exposure such as in imaging contrast. I asked if he had a CT or MRI done recently. He told me he did not but that he was taking an iodine pill for five months. Apparently he was tested and found to be low in iodine and was now taking 1 tablet of Iodoral daily providing 50,000 mcg of iodine.

Within several months I had roughly the same thing happen to three other patients, all on high dose iodine, some based on testing, some not. One of these also had toxic multinodular goiter, one had Grave’s disease and one was hypothyroid secondary to Hashimoto’s thyroiditis. Since then several more cases have come in with new thyroid disease after taking high dose iodine.

I had dimly been aware of iodine becoming a new topic at holistic conferences. A little digging quickly revealed that Guy Abraham, MD was the sole source of the new iodine paradigm.

Dr. Abraham collectively calls his work the ‘Iodine Project’. The articles were originally published in the magazine ‘The Original Internist’ (http://www.clintpublications.com/), a non-peer reviewed journal circulating primarily to chiropractors. His ideas are mimicked nearly verbatum in books from Dr. David Brownstein (Iodine: Why You Need It, Why You Can’t Live Without It) and articles from Drs Donald Miller and Jorge Flechas.

Over the next several months I read every word written by Dr. Abraham and his colleagues. I also read all of their references that were available. Most referred to their own statements from other sources. I also read everything I could find from every other source on human iodine requirements. My conclusion was quite clear, iodine at these new proposed doses was not justified and I have since counseled patients and peers against it.

Since these views on iodine are getting more pervasive, I felt compelled to share my findings and experiences in a broader forum, thus this article came about.

The Iodine Project can be summarized as the following2:

I imagine most who have entertained these ideas had no idea how radical some of the essential underlying concepts are. I could not make this stuff up. He rightfully states that the whole body of his work depends on the points 6 and 7 to be valid.

These last points are so extreme, they deserve a few direct quotes from Dr. Abraham’s work:

“The theory of evolution does not offer an intellectually satisfying answer to this paradox (humans needing iodine levels greatly in excess of what is found in seawater, as Dr. Abraham proposes). . . .Therefore, the original planet earth contained a topsoil rich in iodine, and all elements required for the perfect health of Adam, Eve and their descendants. . . . A sequence of events followed, culminating in the worldwide flood 4500 years ago. Following this episode, the receding waters washed away the topsoil with all its elements into oceans and seas. The new topsoil became deficient in iodine and most likely other essential elements, whose essentialities are still unknown.”3

“Iodine neglect in the 1930’s by thyroidologists progressed to medical iodophobia in the late 1940’s and early 1950’s. Following World War II, there was a systematic attempt to remove iodine from the food supply of Christian America. Iodophobic misinformation, well synchronized with the introduction of alternatives to iodine supplementation in medical practice, strongly suggest a well-planned conspiracy by agents of foreign powers planted at strategic positions in academia and the regulatory agencies.”4

The Iodine Project’s claims that ‘iodophobia’ is part of a large conspiracy beginning in the 1930’s. He discusses how in the 1960’s Americans nearly became released from the “zombifying” clutches of iodophobia:

“In the early 1960’s, potassium iodate was added to bread as a dough conditioner. This was an oversight by the agents of foreign powers planted at strategic positions in academia and the regulatory agencies. . . . This amount of the dezombifier iodine in a major staple food of Christian America could not be tolerated for long. ”5

My responses to the claims are as follows:

Dr. Abraham states that his focus on iodine began after learning about the role of high dose iodine in treating fibrocycstic breast disease in women.

The data that high dose iodine can help fibrocystic breast disease is clear. Dr. Abraham is making the fallacy I have seen others make of confusing a useful property of a substance with its role as an essential element. Nutrients are cofactors for physiological functions in the body. Some also happen to have useful effects when used in doses well in excess of physiologic requirements.

Take niacin as a case in point. As adults, we require only 14-18 mg of niacin to prevent us from pellegra, a fatal deficiency disease. With a diet high in the amino acid tryptophan we can do fine on even lower amounts of niacin. It happens to be that doses of niacin 100-200 times this can act as a gentle HMG CoA reductase inhibitor. Yet these doses can cause maculopathy in up to 7% of adult males who take it6. Those of you who use niacin in enough people have likely observed this reaction as I have.

Clearly, even though niacin may have useful properties in high doses, this does not mean that recommended intakes for all should be rewritten.

The majority of adults can tolerate intermittent high doses of iodine with no adverse effects. Long-term elevations, such as Abraham proposes, are different. Those who are low in iodine, or who have positive thyroid antibodies can have adverse effects by raising their long-term intakes as little as 100 mcg7.

Those who are not deficient can manifest toxicity with as little as 600 mcg daily. The WHO has stated that 1000 mcg is a safe upper limit for most without thyroid antibodies. Thyroid antibodies are commonly present with normal thyroid function and can be found in up to 26% of the population. I did not find recommendations to pre-screen for antibodies prior to treatment in the Iodine Project8.

Japanese women used to have lower rates of breast cancer than American women. This difference declines as they adopt a western diet. Researchers have shown strong dose-related increases in breast cancer among women from different nations related to dietary fat; and inverse dose-related risks to soy food and green tea11,12,13.

I have been unable to find any sources outside of the Iodine Project pertaining to the validity of 24-hour loading tests, even after asking directly. Based on what we know about iodine, this test is not likely meaningful for the following reasons:

We excrete iodine in our urine but variable amounts leave through our bowels and sweat. Sudden large doses can result in fecal loss 400 fold above normal. It has been stated that unless fecal and urine levels of iodine are measured, urine is not an accurate biomarker when iodine intake is changed abruptly such as after a loading dose14.

The CDC has also documented that a population’s 24-hour urinary iodine output levels are only meaningful when iodine intake has been steady for six months or greater. One does not reach steady state in 24 hours15.

Due to predictable thyroid toxicity, no nutritional organization has endorsed intakes of iodine above 600 mcg daily.

Iodized salt is ideally 1/10000 potassium iodine, but many third world attempts ended up wrong. Since the WHO has carefully tracked these cases, we have extensive data regarding changes of iodine intake. Long-term intakes above 600 mcg routinely cause higher rates of thyroid disease including hypothyroidism and hyperthyroidism16.

Recommended dietary intakes of iodine and upper limits, by group17

Additional data on the long-term effects of high dose iodine come from amiodarone usage. Each 200 mg tablet is roughly 75 mg of organic iodine, 8-12% of which is released as free iodide yielding an average net dose of 6-12.75 mg of iodine.

The Wolff Chaikoff effect, AKA the ‘iodine escape mechanism’, has been verified in vitro and in vivo and is present in all humans without exceptions or variations. Were such a ‘fuse’ not in place, normal variation of iodine intake could induce cardiotoxic hyperthyroidism. This effect is used when managing patients in a state of hyperthyroid storm. One can suppress thyroid hormone synthesis with pharmacologic doses of iodine more quickly than with thionamide drugs due to the Wolff Chaikoff effect.

Religious belief, or lack thereof, is a personal matter. Yet modern medicine is based on biology and biology is based on evolution. If someone is unwilling to acknowledge the existence of planet earth prior to 6000 BC, then I see little basis on which to have a rational discussion regarding matters of science.

As Naturopathic Physicians, we love to be the purveyors of arcane knowledge that flies in the face of conventional wisdom, I know I do. Because of this eagerness, I think we can be vulnerable to embracing such ideas too uncritically. As Carl Sagan said, great claims require great evidence.

The claim that the last 80 years of accumulated iodine knowledge duplicated from hundreds of researches in thousands of studies worldwide is all part of a ‘foreign conspiracy’ would require massive evidence which I find lacking.

Breast cancer risk can be lowered by exercise, caloric balance, low fat diet, healthy use of soy and cruciferous veggies and trading alcohol for tea.

Neither require a treatment with a significant risk for generating thyroid disease. Finally, thyroid function does not improve when iodine consumption exceeds established ranges.

Given that risks of high dose iodine are irrefutable, long term intake should be kept at levels of roughly 150 mcg although episodic intake of up to 1000 mcg is tolerable by most without thyroid antibodies.

The Iodine Project in its entirety can be found on http://www.optimox.com/pics/Iodine/opt_Research_I.shtml

A debate between Dr. Abraham’s and Dr. Alan Gaby can be found on the Townsend Letter for Doctors and Patients archives: http://www.townsendletter.com/AugSept2005/gabyiodine0805.htm