Do you know about placebos and nocebos? It’s pretty bizarre but we can feel better or worse from things that really don’t do anything. Say a new medicine helps depression. Did the chemical in the pill help or was it the confidence and reassurance of an authority figure that came with it?

In the example I used, the evidence suggests that the pills are not responsible for the benefits. You can see the proof summarized in this 60 Minutes story. An entire category of medications used by millions of people may be working mostly as placebos.

But the opposite also happens, we call this a nocebo. Something harmless causes a side-effect because of expectations. Would you believe that if someone 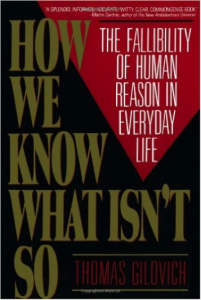 worries that a food can make them feel ill, it can really happen?

In fact, nocebo reactions may even be fatal. In a bizarre story from 2007, a gentleman attempted suicide by taking an intentional overdose of 29 pills that he thought were antidepressants. He was in a clinical trial for an antidepressant and sadly tried to kill himself, not knowing he was in the placebo group of the study. He nearly died and required hospitalization for critically low blood pressure being told the pills were harmless. Reference

Our thoughts and beliefs matter. Probably much more than we could imagine.

One of my favorite books ever goes deep in the science of how our minds can make the wrong connections and lead us astray. I love the title – How We Know What Isn’t So. It’s on my short list of books I reread every year.

It is easy to think about other people being deluded, but our minds have a self-defense mechanism that makes self-doubt more difficult. I think that all of our progress in health and global politics will depend on us not being as easily tricked by our error-prone brains.